The ‘Gran Ballo del Gattopardo‘ (Grand ball of the Leopard), at its 24th edition, once more revived the passionate atmosphere lived by Don Fabrizio, Angelica and Tancredi, the protagonists of the famous novel by Giuseppe Tomasi di Lampedusa, ‘Il Gattopardo‘ – published 60 years ago – that inspired the famous Luchino Visconti’s movie by the same name (The Leopard).

Nino Graziano Luca, director of the Compagnia Nazionale di Danza Storica (National Historical Dance Company), oversaw the celebrations that saw the dancers marching in period costume through the city center of Palermo to Grand Hotel et Des Palmes, where, on the original music, they recreated the original choreography of the waltz and of the quadrille seen in the unforgettable scene of Visconti’s movie. 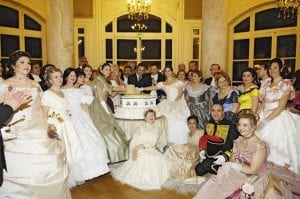 Nino Graziano Luca commented: “Our ‘Grand Ball’ is the only one that has always offered a choreography on all the original music of the movie. The costumes are made by artisan tailors recalling IXX century paintings, period illustrations, or indications derived from the literary works of Dickens, Balzac, Flaubert, Mann, Tolstoy, Stendhal. ‘Il Gattopardo’ remains a timeless classic literary work that, in addition to offering the most probable narration of the resurgence in Sicily as lived by the IXX century elite, is an extraordinary compendium of the customs and society of the time, tightened in the grip between the demands of freedom and progress, and the ancient régime that was about to go down. All of this was faithfully reproduced in the cinematographic masterpiece of Luchino Visconti, a movie that still makes school today.”