Museo del Novecento boasts an extraordinary collection of about 400 twentieth-century works. Many of them are by Italian artists. The others are by renown international artists. Opened in 2010, it is located in Palazzo dell’Arengario in Milan‘s Piazza del Duomo. However, now it is not possible to access its exhibition. Thus, the Museum decided to keep sharing its masterpieces through its Instagram channel, @museodel900. 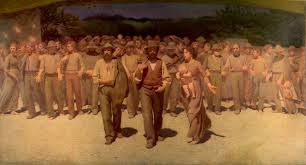 One of Museo del Novecento‘s most renowned works is ‘Quarto Stato‘ by Giuseppe Pellizza da Volpedo is the most renowned. Its exhibition dedicated to international avant-garde hosts, among others, paintings and works by Picasso, Klee, Kandinsky, and Modigliani. As far as Futurism is concerned, it holds precious works by artists such as Boccioni, Balla, Depero, Carrà, just to name a few. And then, masters like De Chirico, Morandi, Martini, Burri, and Merz. While the whole top floor of Arengario is dedicated to the works by Lucio Fontana.

Through daily posts on its Instagram channel, Museo del Novecento allows art lovers to learn about the treasures it holds.

In this way, it is possible to discover the fascinating stories of these masterpieces and the paths they took before reaching Arengario.

For example, a few days ago museodel900 posted about Boccioni’s 1911 ‘Studio di figura femminile’ (Study of the female figure). “The painting was donated by Carl Stettenheimer following the retrospective of 1933: which is also the first attestation of the painting. The work entered the Civic Collections with the title ‘Studio di figura femminile’, a title that then underwent some variations, sometimes due to the identification of the woman represented in Ines (Calvesi 1958, plate 58b), the young woman with whom the artist had a fluctuating relationship until 1911. The faceting of the face, with its unnatural purple complexion, or the chromatic liveliness combined with the “landslide” of the buildings in the background (referring to Robert Delaunay’s suggestion for Tour Eiffel) would constitute the logical background of paintings with similar settings, such as ‘La strada entra nella casa’, exhibited in February 1912 (Paris 1912), in which Boccioni attempts a permeation of plastic volumes and chromatic values, between the quiet figure on the balcony and the animated city background.”