The Wrong Negroni in the designers’ bar in Milan 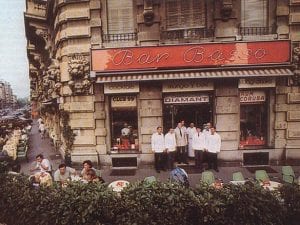 After working two decades of preparing drinks for Hemingway, Clara Agnelli, and Brion, among others, in the exclusive context of Cortina, Mirko Stocchetto, in 1967, brought that culture of drinking to Milan where he bought Bar Basso. Since then the bar crystallized over time, immune to fashions, an unchanging and reassuring place, where generations of Milanese enjoyed an iconic cocktail created by mistake, the Negroni Sbagliato – Wrong Negroni. 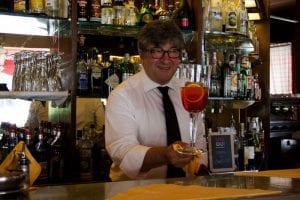 The famous Negroni cocktail recipe is one part gin, one part sweet red vermouth, and one part Campari. One evening in 1972, Stocchetto, while preparing a Negroni mistakenly reached for a bottle of sparkling wine instead of the gin one concocting a Negroni Sbagliato. The new cocktail was a hit and in the years, served in the over-sized glass with a single large cube of ice, it has become Bar Basso’s blessing and curse. Maurizio Stocchetto, Mirko’s son, who started working behind the counter in 1976 when he was 16, confesses: “We always felt a bit like Frank Sinatra, forced to always sing ‘Strangers in the Night’. The Negroni Sbagliato is our bestseller and communication tool. Its success (…) gave us visibility and put us on the international map, even if we do not have fun preparing it.”

In half a century, Bar Basso has become a point of reference in the city and its patrons have included: workers, professors of architecture, right-wing and left-wing students, politicians and industrialists, models and photographers, journalists and stylists, as well as celebrities like Adriano Celentano, Giorgio Gaber, Enzo Iannacci, Jasper Morrison, Stefano Giovannoni, and Ron Arad.