In this moment of crisis, in which it is put to the test, Italy is proving its strength and resilience in thousand of little and grand gestures. From singing on balconies to sharing its immense cultural and artistic patrimony on social media. At the same time, with an intense exchange of energy from and into the country, the Belpaese is receiving messages of support from all over the world.

Not only Italian famous palaces like Palazzo Chigi in Rome or Trieste’s guildhall are boasting special lighting with the colors of the Italian tricolor.

Hundreds of building in all continents turn green, white, and red as a tribute to this incredible country. A country that is used to ‘be the first’.

A country that stores well over 70% of the world’s cultural and artistic heritage. A country that at the moment holds a terrible record. But Italy is also a country that proved more than once to be a phoenix that arose from its own ashes. It is the country that came out of the Middle Ages becoming the cradle of the Renaissance. The one that gave to the world an endless list of discoveries and inventions. And the world now is showing its appreciation with a symbolic gesture to reinvigorate the spirit of the Italian people. 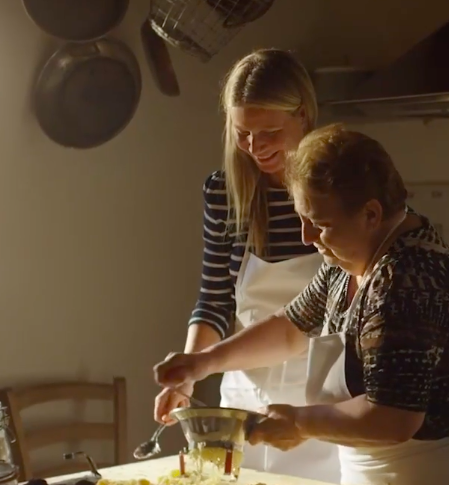 A pic from Gwyneth Paltrow’s video

Also, many international artists are showing their appreciation. Gwyneth Paltrow posted on her Instagram profile “A Love letter to Italy”. A short video showing the actress enjoying the best of her beloved country. The video is accompanied by a long caption that goes straight to the heart. In it, Paltrow recounts some of her life’s most profound happenings that occurred in Italy.

While Marina Abramovic, “The grandmother of performance art” as she calls herself, released a heartfelt message through the ‘In Contatto” (in touch) cultural initiative of Palazzo Strozzi Foundation. The Florentine museum’s initiative wants to stimulate a remote reflection on what Italy is experiencing through the language of art. Many artists are participating in “In Contatto” including Ai Weiwei and Tomás Saraceno. In the video with which Abramoviæ delivered her message of encouragement and solidarity, she appeared visibly moved. She has had a special relationship with Italy since she took part in an exhibition in Rome in 1973. It has been the first country to host her art, and the second one after her country of origin, where she staged her performances. Italy gave her the opportunity to start her career at the time in which there weren’t many women doing performing art.