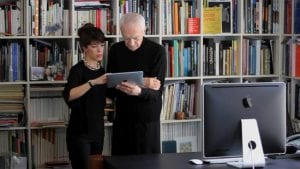 The spacious duplex apartment that for many years has been the home of the late Lella and Massimo Vignelli, one of the world’s most influential design teams, is a prime example of the iconic couple’s aesthetic of modern minimalism and timeless elegance. Now their children, Luca and Valentina, who no longer live in New York, have decided to sell it. 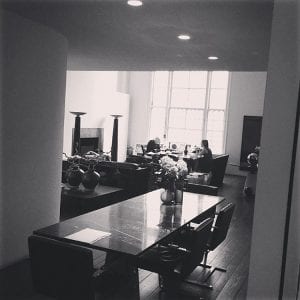 The 3,900 sq. ft. property, listed by Sotheby’s for $6.5M, has been mostly kept like Lella and Massimo left it. Luca said to the New York Times that “to some it may seem dated, but their intention was to live in a timeless space,” for this reason he hopes to find a buyer who appreciates that space and the influence his parents had on it. The apartment’s modernist design and sparse decor, with almost entirely self-designed furniture, helps to put in context the significant mark that the couple left on the design world, which was beautifully captured in the 2012 documentary ‘Design Is One: The Vignellis‘. In 1978, they bought the two floors apartment – three bedrooms, three bathrooms and a spectacular living room with ceilings over six meters high – located in a prime Upper East Side building designed by Charles Platt for about 250 thousand dollars, and today it can be considered a museum of Italian design. There, in 2014, two years before Lella, Massimo died, after a career shared with his life partner and marked by iconic works in furniture design, corporate branding and transportation graphics, such as Bloomingdale’s and American Airlines corporate identities and the controversial and famous map of the New York City Subway.