The origins of the iconic Italian pasta with tomato sauce 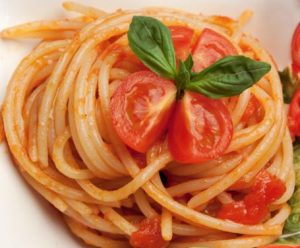 Although the tomato plant is originally from America, in time its success turned out to be linked to another country, Italy. There, the fruits have become one of the main ingredients of one of the dishes symbol not only of the country but also of a lifestyle.

When the tomato was first imported into Europe from American, it was presented with extreme suspicion. In the 16th century, doctor Pietro Andrea Mattioli included the fruit from the New World in his book in the same chapter with the mandrake, a highly toxic plant. The first time tomatoes were included as an ingredient was only in 1692, when Antonio Latini, a court cook of the Spanish Viceroy in Naples, publishes the recipe for the ‘Spanish style tomato sauce’ in his cookbook – the reference to Spain in the recipe title is due to the fact that this country was the gateway for products from America. However, the simple recipe, quite similar to today’s one, was used to accompany meat dishes rather than pasta. For over a century tomatoes were used in the most varied preparations, such as those presented by Francesco Leonardi at the end of the 18th century, which could well fit in the most modern experimental cuisine: ‘Tortoise coulis with tomato sauce’ and ‘Pears soup in tomato sauce’.

The matchmaker that set up the tomato sauce with pasta Vincenzo Agnoletti in 1803, who introduced the combination in his ‘Cucina Economica’. The author describes a soup with small pasta cooked in a broth flavored with tomato sauce, in this recipe, for the first time, pasta substitutes rice, which was generally used in this kind of preparations. However, the first recipe of ‘Spaghetti with tomato sauce’ was published in 1837 by Neapolitan Ippolito Cavalcanti in his cookbook ‘Cucina teorica-pratica’, that presented recipes both in Italian and in Neapolitan dialect.

Previous Post Juventus Night for the NBA
Next Post Hazelnut spread: Nutella is not the only one