The Italian evolution of the packaged ice cream 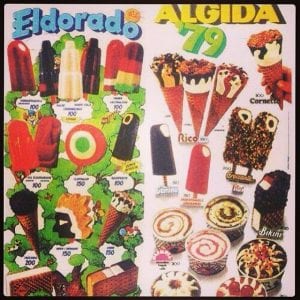 Especially during the hot summer months, ice cream is everywhere in Italy. Traditional homemade gelato parlor may not be logistically practical at every street corner, but there is not a single snack bar, kiosk or simple eatery in the country that does not have a cheerful, refrigerated ice cream case from which to select a packaged ice cream.

The first packaged ice cream on a stick, the ‘Mottarello‘ – vanilla ice cream coated with crunchy chocolate -, was introduced in 1948 by Motta. Since then generations of Italians grew up spending a portion of their summertime in front of the colorful signs with the illustrations of all the ever-fancier flavors and shapes they could choose from. Some of the earlier ones no longer exist, but others resisted many years, like 1959 ever-green classic ‘Cornetto‘ (little horn), a crispy baked wafer cone coated with a chocolate layer to hold vanilla flavor ice cream. While the coffee flavored ice-cream has been packed in the ‘Coppa del Nonno‘ (grandfather’s cup), a brown plastic cup resembling an espresso one, since 1955. 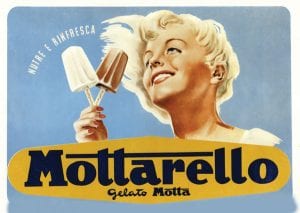 More recently, the ‘Cucciolone‘ (big puppy) – vanilla, chocolate and zabaione ice cream packaged between two biscuits with cartoons impressed on them -, became a cult in the ’80s, thanks to its tv add that promoted it as a “ten bites” snack. The ‘Calippo’ also was released in the 80s with a vaguely allusive television add that initially scandalized the adult public, only to became one of the children’s favorites.

Obviously, also popsicles are still there, what changed through the years was their flavors, hence their colors; if the tamarind one is no longer available, mint and lemon are ever-present in the refrigerated counters.

Previous Post Zeffirelli's "Romeo and Juliet" in Pienza
Next Post Quadarella: 2 gold medals and a record in 3 days