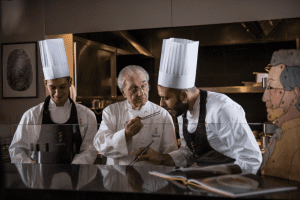 After Chicago, New York, Hong Kong, Beijing, and Tokyo, the Great Italian Cuisine World Tour dedicated to the master of Italian cuisine Gualtiero Marchesi inaugurates the European part of its schedule in Paris on February 4th. The aim of this tour of the world, organized by the Gualtiero Marchesi Foundation and promoted by in partnership with Enit, is to celebrate the chef who has elevated an honorable craft to the dignity of art, in a constant dialogue with music, visual arts, design, and fashion. Moreover, it marks a starting point for a constant reflection and dialogue on training, research, and knowledge in the food sector. 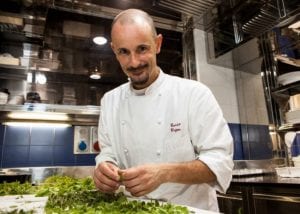 The program, after the Parisian appointment, will see the event taking place in London on February 12th, Berlin on February 19th, and Moscow on February 26th. On March 19th, the anniversary of the birth of Marchesi, the Great Italian Cuisine Tour will close in Milan with the screening of the film ‘Gualtiero Marchesi the Great Italian‘. Antonio Ghilardi, one of the first chefs of the Marchesi team since Bonvesin de la Riva, will be the executive chef of all stages and will be joined in Paris by Enrico Crippa and Davide Oldani, in London by Andrea Berton and Alfio Ghezzi, in Berlin by Ernst Knam, and in Moscow by Carlo Cracco.

Alberto Capatti, president of the Gualtiero Marchesi Foundation, said: “If Gualtiero Marchesi brought the nouvelle cuisine in Italy in the 80s, promoting a new Italian cuisine, the new Italian cuisine remains the priority project of the Foundation after the death of its founder. It is an inheritance and a goal to which students, enthusiasts, and scholars intend to respond with the page and with the plate, with the word and with the art.”