The best caviar is Italian 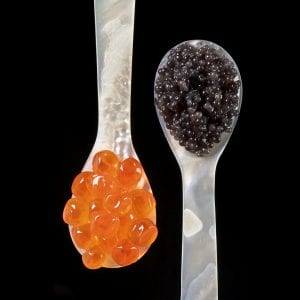 Caviar is a product derived from the eggs of sturgeon, a fish of very ancient origins, that was already appreciated by Greeks and Romans. In the past decades, professional fishing was drastically reducing the population of sturgeons in the world to the point that wild caviar was banned, due to the sturgeon being listed as endangered species. Thus, the demand had to switch from captured to bred sturgeon and Italian companies based in Lombardy, such as Salmo-Pan and Agroittica, were ready to meet it with their products, which today are recognized as the best in the world.

Salmo-Pan, producer of the Adamas Caviar, was founded in 1988 in the heart of the Po Valley by Matteo Giovannini who explained: “We are based inside the Natural Park of the Tormo River, one of the few unspoilt places in the Lombardy Region: a river of resurgence, with constantly fresh, clear and crystalline waters, in which the carefully selected sturgeons are fed with GMO free feed. Furthermore, the entire production cycle takes place in total respect of the natural ecosystem, thanks to the use of clean energy produced by photovoltaic panels and with particular attention to the quality of the raw materials used ». Adamas is also known for its precious white caviar, obtained from the very rare albino sturgeon.

Agroittica, founded in 1978 in Calvisano (Brescia), turned its fish farming to sturgeon, and created its caviar-specific brand, Calvisius, in the early 1990s, collecting since the beginning positive gourmet reviews and public successes. Among the secrets of its success there are the purity of the breeding water, the constant checks on the production chain, and the preparation process completed in less than two hours. Calvisius, has such a leading role in the worldwide market that two foreign subsidiaries, wholly owned by Calvisius Italia, have been founded in 2007 – Calvisius USA – and in 2015 – Calvisius France.