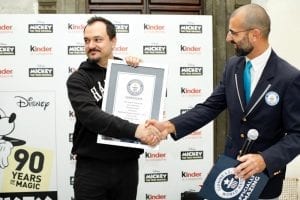 At Lucca Comics & Games The Walt Disney Company Italy celebrated the 90th anniversary of Mickey Mouse by beating the Guinness World Record for the longest comic strip by a single artist. The cartoonist behind this extraordinary undertaking is Claudio Sciarrone, one of the most important Disney illustrators.

The previous Guinness World Record for the longest comic strip by a single artist was set in March 2017, by Pakistani cartoonist Unaiza Ali Barlas, who drew a series of black and white squares that made up a 267.38 meters long comic strip. However, working for three days from November 1st to November 3rd in the historic Cortile Carrara in Lucca, Sciarrone beat Barlas’ record by over 30 meters. His strip, 297.50 meters long, sees Mickey Mouse protagonist of an original story scripted for the occasion by Sciarrone himself paying homage to the great tradition of comics in Italy. 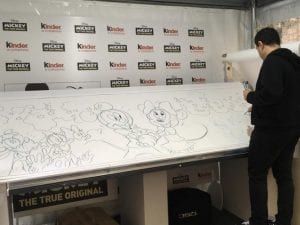 Sciarrone is currently one of the most important artists of The Walt Disney Company Italian production. Since 1992, he has created several comics with ‘Mickey Mouse’, ‘Huey, Dewey and Louie’, ‘Goofy’, and ‘Donald Duck’ (mostly scripted by Massimo Marconi) for Topolino (the Italian version of Mickey Mouse), as well as several ‘Mickey Mouse’ detective stories for Topomistery. Moreover, he drew several ‘Paperinik’ stories for the Disney MEGAzine and Paperinik New Adventures, as well as the ‘Mickey Mouse’ mini-series ‘Il Mondiale Scomparso’. He also illustrated the comic adaptation of the Disney film ‘Atlantis’, on top of creating the layouts of the ‘Monsters Inc’ adaptation. 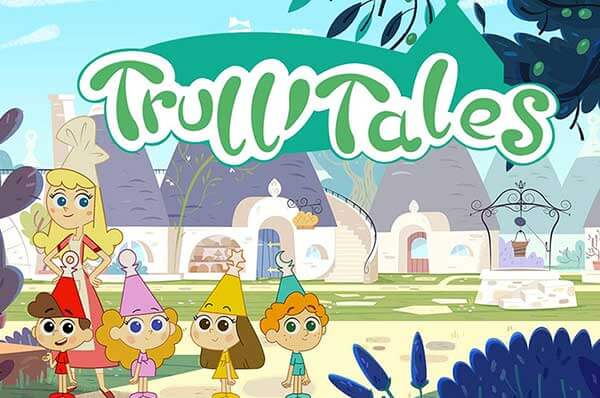