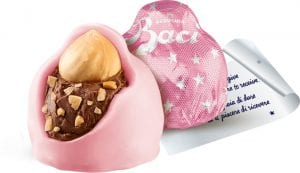 The legendary Baci Perugina created in the 1920s in Perugia is the latest sweet treat to be wrapped in Ruby chocolate by food and beverage Swiss giant Nestlé, following the introduction of KitKat Ruby earlier this year.

The new Baci Perugina Limited Edition is bright pink thanks to a coat of Ruby chocolate, the chocolate variety developed in 2004 by Belgian-Swiss cocoa company Barry Callebaut using ruby cocoa beans that have been identified as having the right attributes to be processed into chocolate. The production methods are being kept secret and Barry Callebaut denied the use of genetic modification, but, there is speculation that Ruby chocolate is made with unfermented cocoa beans, which can have a natural red-pinkish color. 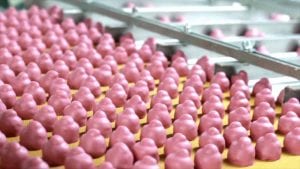 Not many know that the original recipe of Baci – soft gianduia filled with a crispy hazelnut, coated in dark chocolate and wrapped in a multilingual love note – was introduced in 1922 by eclectic businesswoman Luisa Spagnoli, founder of Perugina, as well as of her fashion brand and Angora Spagnoli (breeding of angora rabbits). In 1988, Nestlé corporation acquired Perugina, which continued the production of the, by then, iconic chocolates. Now Nestlé aims to set trends and use innovation to launch new, exciting products. One of these is the new Baci Perugina Limited Edition which modifies the traditional recipe with a pink coat of Ruby chocolate coating, whose flavor is described as sweet yet sour, with an intense berry-fruitiness and little to none of the cocoa taste traditionally associated with other varieties of chocolate.