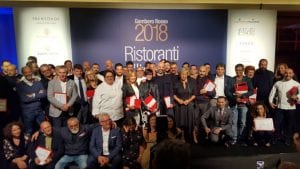 In the ‘Guida dei ristoranti d’Italia 2018‘ (Guide to Italian Restaurants 2018), Gambero Rosso confirms the three forks to Niko Romito and his sister’s restaurant in Castel di Sangro (L’Aquila) and its first place on the guide’s ranking with an extraordinary 96/100 rating.

The adventure of ‘Reale‘ (meaning ‘royal’) began in 2000, when Niko and his sister Cristiana took over the osteria that their father Antonio had opened in the village of Rivisondoli (L’Aquila), on the premises of the historic family pastry shop. Neither sibling had any previous experience in the restaurant business, but in just a few years ‘Reale’ seduced customers and food critics with a highly original and personal cuisine that earned them the first Michelin star in 2007, and the second one in 2009. In 2011 the business moved to the present location at Casadonna in Castel di Sangro, in the Parco Naturale d’Abruzzo, where ‘Reale’ found its most complete expression. The third Michelin stars arrived in 2013. Today this restaurant is the beating heart of the Niko Romito’s ‘system’ – a laboratory where every day the chef and his crew conduct intensive research and give birth to new dishes – and now it has been crowned the top Italian restaurant.

During his speech at the award ceremony Niko Romito said that for him is important to deserve three Michelin stars, and three Gambero Rosso forks, as well as being able to bring quality into a hospital canteen, demonstrating that haute cuisine can be done for many, if not for all, and with a sustainable project. In saying this he referred to his ‘Nutrition Intelligence’ project, which has revolutionized the meals distributed in the two hospitals in Rome, “Cristo Re” and “Villa Betania”, improving the nutritional intake for patients and value for money of food cost.