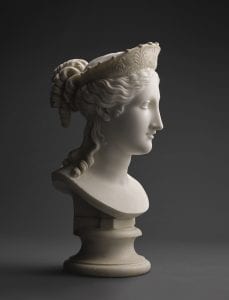 The ‘Bust of Peace’ is white marble female head, on a white marble socle (for a total of 53cm) belonging to the famous series of Ideal Heads, the artist’s most intimate works, which embody Canova’s ideal of beauty, and were developed with the express purpose of gifting them to friends and patrons.

Canova designed this masterpiece in gratitude for his first British patron, and friend, John Campbell, Lord Cawdorn, who supported Canova in the campaign conducted on behalf of Pope Pius VII for the repatriation of Italian art plundered by Napoleonic armies. Subsequently, it had a history of travels and passages through five generations of Lord Cawdorn’s heirs through which the identity of the author was lost. Indeed, in 1962, when the contents of the family house Stackpole Court in Pembrokeshire were sold at auction, the Bust of Peace was simply described in the catalog as ‘a white marble bust of a lady wearing a diadem’, and only recently the owner, after countless research, has managed to trace it back to Canova. 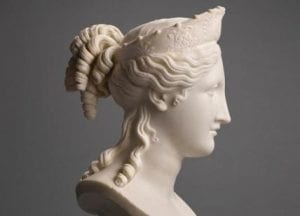 Christopher Mason, Director, Sotheby’s European Sculpture & Works of Art Department, said: “This is one of the most exciting rediscoveries I have encountered, the culmination of years spent piecing together fragments of information that together now tell the complete story of what is a truly exceptional, long-lost work. The ‘Bust of Peace’ is one of a small series of works that Canova made late in life for his closest friends and patrons and so, as you might expect, each marble is executed with a befittingly high degree of care and attention. The sculptor’s ability to breathe life into cold marble is unrivaled in Neoclassical sculpture. This one is a technical tour de force, displaying Canova’s absolute mastery in marble, particularly with the beautiful carving of the hair and the purity of the expression.”