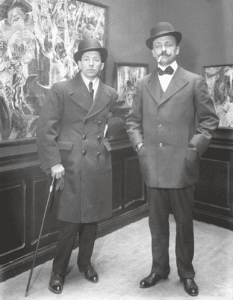 A painting by Umberto Boccioni had not been auctioned in London since 2008, when ‘Donna che Cuce’ (1096) auctioned by Christie’s. On February 28th, Sotheby’s will offer ‘Testa + luce + ambiente‘, an oil on canvas painted in 1912 estimated between 5.5-7.5 million pounds (7.6–10.4 million dollars). It is very rare to see a futurist painting by Boccioni on the market. The 23 5/8 by 23 5/8 in. Futurist masterpiece was bought in 1914 by the Italian writer and screenwriter Bruno Corradini and then, in 1959, by art critic and journalist Margherita Sarfatti. It remained the property of the Sarfatti family until the 1990s. The current owner bought it in 1998. 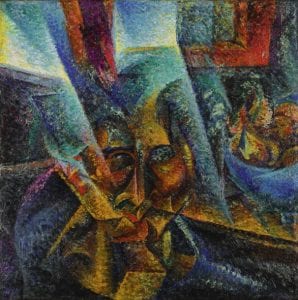 A leading figure among Italian Futurists alongside Severini, Balla, and Marinetti, Boccioni played a fundamental role in shaping the visual aesthetic of the highly influential movement that represented a definitive break with the art of the past, and in particular the classical tradition so evident in Italy. The radical pictorial vocabulary of Futurism developed in parallel with other revolutionary movements, including Cubism and Expressionism, changing the course of Western art. Overturning centuries of tradition, Boccioni led the way in an  assertive, participatory and daring movement. ‘Testa + luce + ambiente’, painted just four years before his tragic early death, captures the artistic innovation of depicting velocity and experience onto the canvas.

Helena Newman, Global Co-Head of Sotheby’s Impressionist & Modern Art Department & Chairman of Sotheby’s Europe, commented: “It is incredibly rare that a futurist work of Umberto Boccioni appears on the market and this work fully represents the essence of its artistic dynamism. The intense period of creativity during which Boccioni started the Futurist movement was tragically interrupted by his untimely death in 1916. So there are very few existing paintings, most of which are kept in museums, including the MoMA in New York and the Museo del Novecento in Milan. Boccioni’s ‘Testa + luce + ambiente’ auction represents a unique and unrepeatable opportunity for collectors all over the world to acquire one of the rare Futurist masterpieces.”