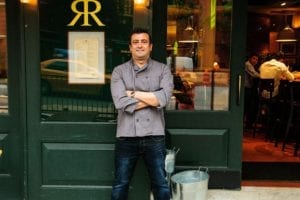 After the success of his restaurant ‘Rafele‘ inaugurated in 2012 in the West Village, in which 40 people work to express the uniqueness of the original Southern Italian cuisine, Naples-born chef Raffaele Ronca opens a new location in the charming Westchester County village of Rye.

With a diploma in accountancy and chef’s hands, Ronca grew up in his family’s butcheries and fish shops, and in his uncle’s restaurant in Naples, which became his training ground from both a human and professional point of view. However, his greatest teacher remains his mother, who taught him how to make fresh pasta and from whom he still tries to steal some cooking secrets. 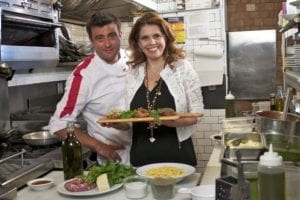 In Rye, Ronca brings the successful formula that he has already tested in his first restaurant: authentic Italian dishes combined with the chef’s native Neapolitan influence, quality products, attention to raw materials, affordable prices, and above all great passion and respect for food and customers. The novelty is the use of a wood charcoal kitchen, without the use of gas, in which Ronca prepares his trademark masterpieces: Neapolitan calzone, Mussel soup, Cacio e pepe in a pecorino cheese wheel, Baked sea bass, Smoked mozzarella, and, of course, the famous Neapolitan pastiera based cheesecake, named one of the best in America by ‘Food & Wine’.

The location, which used to house a Chinese restaurant, has been renovated to reveal much of its original charming brickwork. The warm reclaimed wood décor that characterizes ‘Rafele’ appears also in ‘Rafele Rye’ in the form of ceiling beams and tables made of recycled wood from old houses and farms in the Rye area. Also, an amber glow is added to the ambiance with beautiful chandeliers in the dining room and over the main bar.