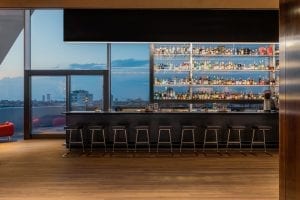 Finally, at the end of Milan Design Week, the Prada Foundation opened Torre, its new nine-storey tower in Milan that offers visitors a new perspective on the city, through its large windows. This last building completed by architect Rem Koolhaas’s project that converted a former distillery into an art hub for the billionaire fashion designer and collector Muccia Prada.

In the long-awaited Torre, a 60-meter-high white concrete building with an irregular profile, art, fashion, and food merge into a multi-purpose, yet coherent, ensemble. A total of 2000 square meters of exposition area is spread between first 6 floors – currently hosting the Atlas project -, while other three floors are dedicated to restaurants and services, with the roof-top terrace conceived as a flexible space to accommodate a bar with a 360 degrees view on the city. 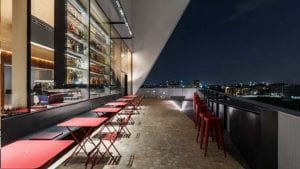 The restaurant on the sixth and seventh floor, with windows and terrace overlooking the city center, is furnished with pieces from New York’s Four Seasons Restaurant, which was designed by Philip Johnson in 1958, as well as pieces from Höller’s pop-up nightclub experience, which made its debut at Art Basel in Miami Beach in November 2017.

For the Torre restaurant, resident chef Fabio Cucchelli has sourced recipes inspired by regional recipes without focusing on a personal style, indeed, in collaboration with Care’s (the worldwide project that brings together ethical chefs), the kitchen will host for 4 or 5 times a year young chefs under 30 from all over the world: each of them will work with Cucchelli for a couple of weeks, offering a distinctive menu from their country. In Torre, the furnishing, the gourmet dishes, and the works of art on the walls all the elements contribute, with “a collage of pre-existing themes and elements” – as Koolhaas says – to create an atmosphere that has both an old-world charm and an international appeal.