Petrucci, the Italian star of the street art 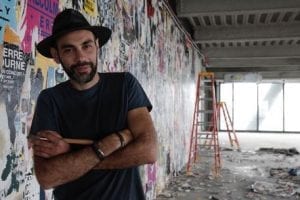 Nello Petrucci, one of the most popular artists on the world stage of contemporary art, is the only Italian artist to exhibit in New York in an exhibition entitled ‘A masterpiece in the sky’ that opens yesterday at the World Trade Center. The complex owned by the Silverstein Foundation is a reference point for contemporary street art and currently hosts works by about 50 artists from all over the world – including Ron English, Brandon Sines, WhlsBe, Rubin 415, Lauren YS, Chris WRK, and Layercake – with the declared intention of becoming ‘a masterpiece in the sky’.

Petrucci has been working in New York since the beginning of September to create an original work entitled ‘The essence of lightness’, a mural that covers a 12 meters long and 3.5 meters tall wall of the 45th floor of the 3 World Trade Center. Shreds torn from advertising images plastering New York walls find new life in a work that combines past and present in a dynamic way, bestowing the gift of speech on the previously silent surface. 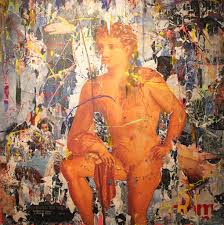 Petrucci, 37 years old from Pompeii, is an artist and filmmaker who lives and works between Pompeii and New York. After graduating in cinematography in Rome and working with directors such as Martin Scorsese, Ari Taub, Manetti Bros, and Alan Taylor, he began to realize various independent projects – short movies, video art, independent movies – for which he received numerous awards. His artistic journey began when he moved for a short time to Dublin, where he met numerous artists, and continues between Rome and Naples, where he attended the Academy of Fine Arts. He finally found the best way to express his artistic sensibility through collagè and decollagè overlaying images in order to create a world, a kinetic language, made of intersections and interactions.