MoPi – The Museum of Pizza is opening in New York

It is called MoPi – Museum of Pizza – and it will open on October 13, in Brooklyn. A whole museum which, for a limited amount of time, will delight visitors with a full immersion experience in the pizza world on the initiative of Kareem Rahma, head of the Nameless Network, a Brooklyn company.

The Museum will allow visitors to learn about the history of pizza retracing its origins and spreading all over the world. It will also offer an interactive overview of the important role of the food acquired in pop culture and customs, so much to be awarded the status of world heritage by UNESCO. On Mopi’s website the museum is described as “a place to capture timeless memories and take in larger-than-life, immersive installations. A space to bask in multi-sensory, psychedelic pizza joy. (…) an act of creation sure to make your every minute inside the museum a timeless pizza memory.” And it will do so thanks to exhibits such as: The Museum of Pizza artists “gallery”, the Pizza cave, the  Pizza fun house, the Pizza beach, The interactive history (and untold story) of Pizza, “Pizza Zen”, Pizza games, and The official #MoPi Pizza Films screening room and media lab. 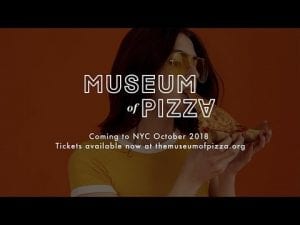 In consideration of the numbers of pizza consumption in the US in general – the equivalent of 50 hectares every day -, and in New York in particular – where 10% of American pizzerias are concentrated -, it is not a surprise that an undisclosed, for the time being, location in the Big Apple will host this museum dedicated to the role that this food has in pop culture around the world. Indeed, in MoPi’s view pizza is “more than a tasty epiphany of cheese, dough, and sauce – it’s a uniter, a universal language, a cultural exclamation point.”