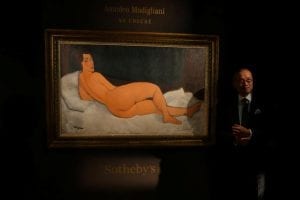 Sotheby’s auctioneer Helena Newman led a packed salesroom bidding that started at $125m and concluded at $139m, which became $155.2 m once the fees were added for “Nu Couché (sur le coté gauche)” – reclining nude on the left side – by modernist Tuscan master Amedeo Modigliani. Newman declared it was: “the highest price at auction ever achieved here a Sotheby’s”. 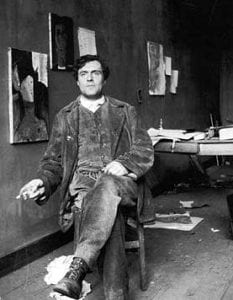 The nude, painted in 1917, three years before Modigliani’s death at the age of 35, was supposedly owned by Irish horse breeder and trainer John Magnier, who’d picked up the work in 2003 at Christie’s for $26.9m.  Magnier, who was not present at the sale, has never confirmed to own the painting, but there have been strong hints, including the fact that Magnier would have named a three-year-old colt of his “Modigliani” for an association with “excellence and success”.

“Nu Couché (sur le coté gauche)” is considered Modigliani’s greatest – as well as being the largest with 1.5 meters across – one from an iconic series where he reinvented the nude for the modern era. It is also Modigliani’s only horizontal nude to contain the entire figure within the canvas, and when it was first displayed at Galerie Berthe Weill in Paris, in the same year in which it was painted, it caused such a scandal that the exhibition was closed before it sold. More recently it has been the ‘star’ of the recent blockbuster retrospective dedicated to the artist from Livorno by the Tate Modern in London that brought together 12 of his nudes, the largest number ever assembled in Britain.