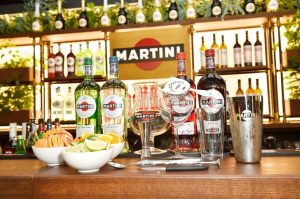 The historical bar of Bacardi Martini, Caffè Torino, is the protagonist of a series of special events that scheduled in Bologna, Turin, Florence, and Milan. The tour is a true traveling format that has recreates, with a modern twist, the bar dedicated to the three most famous Italian cocktails: the ‘Negroni‘ – that in 2019 will celebrate the 100th anniversary of its creation -, the ‘Americano‘, and ‘Mi-To‘ – that owes its name to the place of origin of its two main ingredients, the Milan for the Bitter and Turin for the Vermouth. The initiative is also an opportunity to celebrate the two Martini Special Reserve, Ambrato and Rubino. The two are respectively introduced to the public with these words: “A new Vermouth di Torino, proudly harking back to the days of craftsmanship in blending local aromatic herbs and spices,” and “From the fields of Pancalieri, master herbalists gather the beautiful Roman chamomile to infuse a balance of sweet and bitter.”

In Florence, the event was hosted at ‘La Ménagère‘, where resident barman Luca Manni welcomed as special guest senior mixologist Giorgio Bargiani. Born in Pisa, Bargiani a few years ago started working behind the counter of the prestigious bar of The Connaught Hotel in London – 5th place The World’s 50 Best Bars ranking – under the leadership of Agostino Perrone. At ‘La Ménagère’, he hypnotized the audience with the elegance of his gestures and the excellence of his cocktails, but he also explained the process behind the creation of a new cocktail: “Making a cocktail is the last act of a very long process that involves its conception, technical testing of the procedure, costs analysis, and a notably long series of tastings and checks by all the people involved in the process. Just under thirty people work on the cocktail before it is tasted by customers.”