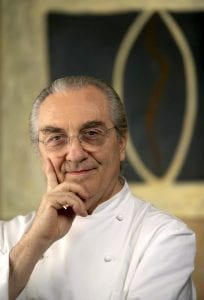 The Gualtiero Marchesi Foundation presented today in Milan the Great Italian Cuisine World Tour, an operation that consolidates the value of the great chef as a global brand. In coincidence with the beginning of the third edition of the Italian Cooking Week, the first of the ten stages the Great Italian Cuisine World Tour is scheduled to take place in Chicago, on November 12th. The following United States event will be in New York on November 16th. Subsequently, the tour will go to China for two dates in Hong Kong on November 19th and in Beijing on November 22nd. The last appointment for 2018 will be in Tokyo, Japan, on November 26th. Four more appointments are scheduled for February 2019: in Paris on the 4th, in London on the 11th, in Berlin on the 18th, and in Moscow on the 25th. The Grand Tour of Gualtiero Marchesi will close in Milan on the March 19th, the anniversary of the Maestro’s birthday.

During each of the events the movie ‘Gualtiero Marchesi the Great Italian‘ will be screened. Antonio Ghilardi, one of the first chefs of the Marchesi team will sign the gastronomic offer of all the events and he will be joined by Pietro Leemann in New York and by Luca Fantin at the Bulgari Ginza Tower in Tokyo.

Thanks to the many partnerships, the Great Italian Cuisine World Tour is not only synonyms with haute cuisine, but it will also help the promotion of many prestigious Italian brands. In fact, the Gualtiero Marchesi Foundation is promoting the tour together with Enit, with the sponsorship of the Ministries of Foreign Affairs, Cultural Heritage, Agricultural Policies and Tourism, the Lombardy Region, Fipe, and Altagamma, in partnership with Angelo Po, Ballarini, Ferrarelle, Wineries Ferrari Trento, Illycaffé, Bulgari, Calvisius, Canon Italy, Felicetti, Dhl and Maserati.