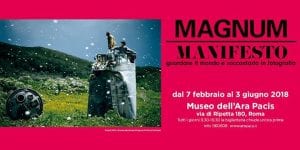 Magnum Photos, the renowned photo agency created by Robert Capa, Henri Cartier-Bresson, George Rodger, and Chim (David Seymour) in 1947, celebrates its 70 years of activity with a landmark exhibition that will be on show at the Museo dell’Ara Pacis in Rome until June 3.

The exhibition entitled ‘Magnum Manifesto‘ and curated by Clément Chéroux, senior curator of photography at San Francisco MOMA, has already been hosted by the International Center for Photography in New York, and it explores the history of the second half of the 20th century through the most evocative images captured by 75 masters and providing a new and insightful perspective on the contribution of these photographers to our collective visual memory. 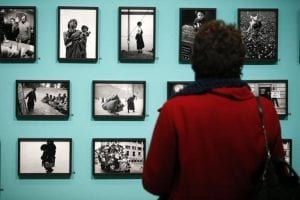 Andréa  Holzherr, worldwide director of all Magnum Photo exhibitions, said: “The Magnum authors were the first ones to interpret our time and helped to shape the cultural evolution with their committed, ironic, critical and original look. (…) For the 70th anniversary we wanted to collect the most significant images, combining the chronological and thematic studies of the cooperative with that of the great issues that marked the second half of the twentieth century and the early 2000s.”