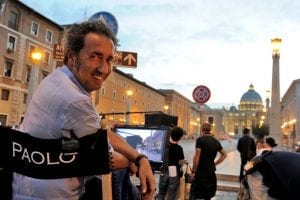 Paolo Sorrentino, best known for his Oscar-winning movie “The Great Beauty” (La Grande Bellezza) and the successful TV series “The Young Pope”, said he wanted to profile Italy’s most infamous living politician; and the trailer of his new movie, “Loro”, is finally out.

With a screenplay co-written by Sorrentino and Umberto Contarello, the movie is an unofficial biography of businessman-turned-politician Silvio Berlusconi, about whom Sorrentino said last year: “The world has an idea of Berlusconi [as] a very simple person, but I understood that he is much more complicated than this. I would love to try to describe this complex character.” The title “Loro” in Italian means “them” – indicating the vast entourage revolving around the media tycoon -, but it is also a wordplay on “l’oro”, meaning “the gold” – as a symbol of the protagonist opulent life. The movie focuses on Berlusconi’s personal life and on how it intertwined with his long career in media and politics by telling the story of those who try to “change the course of their own lives” thanks to their personal relations with him. Neapolitan actor Toni Servillo convincingly impersonate the movie’s central character with a spot-on impression of the four-time prime minister’s voice as well as by sporting his trademark tan and distinctive hairline. 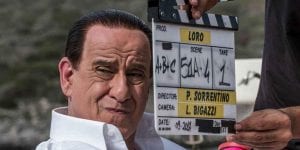 “Loro” is produced through Indigo Film and co-produced by France’s Pathé, because Sorrentino’s usual Italian co-financier Medusa Film, which is controlled by Berlusconi, was not willing to participate in this production, the trailer of which coincidentally came out shortly after Berlusconi’s greatest political defeat to date: his Forza Italia party won just 14 percent of the vote in Italy’s general election.

Previous Post Two Italians among the world's 100 most influential people
Next Post “FuturPiaggio”, a new exposition in a renewed museum