Liverani among the top 100 CEOs in Germany 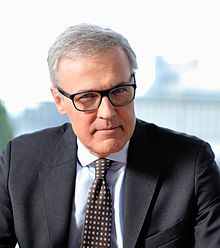 The CEO and Country Manager of Generali Deutschland insurance company, Giovanni Liverani, is included among the 100 most important managers in Germany. He is the only Italian, and one of the only 10 non-German managers in the ranking. Liverani’s name appears at the 56th place ranking considering German companies compiled by the ‘Deutschland Manager‘ business magazine. In the first place, there is the leader of Volkswagen automotive company, Herbert Diess.
Liverani, born June 1, 1964, in Udine, graduated in Engineering at Politecnico in Milan. His career began in 1991 as a development engineer in the headquarters of the Assicurazioni Generali in Trieste. Soon after he became a co-founder and member of the executive board (responsible for sales, marketing, IT and operations) of Genertel, the direct insurance company of the Generali Group in Italy. Subsequently, he was appointed as regional area manager with responsibility for Germany and Austria and as head of Assicurazioni Generali’s Central Europe unit.

In 2013, Liverani became a member of the international Generali Group Management Committee and in the following two years he held various management position for the international Generali Group. As Head of Business Performance Management Central Europe, Liverani supervised the insurance business in Italy, Germany, and Switzerland and, as Regional Officer, he has been responsible for the insurance business in the EMEA region (Europe, Middle East, Africa). On April 1, 2015, he took office as CEO of Generali Germany or Generali insurance.

ARTE GENERALI: Insuring is an art (English and German interview)