Jorit murales for the 2019 Summer Universiade 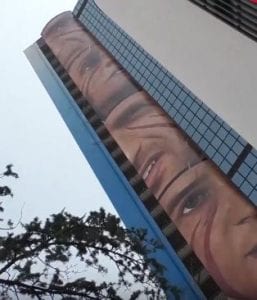 Sixty years after Turin hosted the largest multi-sport event in the world apart from the Olympic Games – sometimes also known as the ‘World University Games‘ -, Italy is once again the stage for the world’s best university student-athletes.  Over 8,000 participants (including coaches and officials) arrived in Naples for the Games. In total, 5971 athletes from 112 countries will compete in 222 events across 18 sports. Many of the student-athletes will be looking to kick-start their athletic careers with a view to Tokyo 2020, but some are already Olympic and World Championship medallists in their own right.

Jorit, as he is commonly known, created, in one month, five 20-meter high portraits of famous athletes, one for each one of the Provinces of Campania: for Naples, former boxer Patrizio Oliva – gold in the light welterweight division at the 1980 Moscow Olympics -; for Salerno, former high jumper Antonietta De Martino  – currently holding the Italian women’s indoor and outdoor high jump record -; for Avellino, former professional footballer Fernando De Napoli – who during the 80s and 90s won the ‘scudetto’ twice with Napoli and twice with Milan -; for Caserta, former professional basketball player and coach Ferdinando Gentile – who played both in Italy and Greece winning also the EuroLeague title -; for Benevento, Carmelo Imbriani footballer and former coach of Benevento who died in 2013.