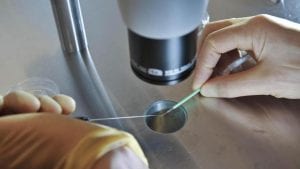 Researchers at the Centre for Integrative Biology (CIBIO) of the University of Trento published an article on Nature Biotechnology to illustrate their discovery of a molecule that can effectively correct DNA alterations like those causing genetic diseases and cancer.

The genome editing molecule was initially developed at Berkeley and at Boston’s MIT, but only CIBIO’s researchers were able to find the right ‘formula’ to stabilize it and make it reliable enough to provide safety of intervention. Anna Cereseto, professor at CIBIO and one of the authors of the study, said: “We have developed an experimental method of screening through which we obtain a molecule, which we called ‘evoCas9‘, which is really precise in changing DNA. It is an enzyme of absolute reliability that makes the change only at the established point.” Adding, “It is a ‘molecular machine’, made of the Cas9 protein and an RNA molecule, that reaches and cuts a specific segment of DNA.”

The ‘perfect corrector’, as Cereseto described it, devised as a method to modify DNA for therapeutic purposes, could also be used in non-medical genome editing sectors, for example to genetically modify edible plants and farm animals. This study represents an important advancement in genome editing and the interest in this technology, and in the relative patent, is global. Indeed, the CIBIO’s researchers are working in this direction to found the Trentino biotech and attract capitals. As Cereseto said: “The goal now is to enhance the patent derived from the invention and generate positive consequences on the territory of Trentino.”