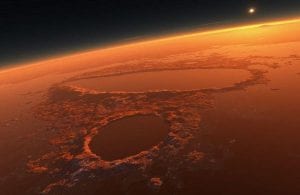 Italian radar Marsis, on the Mars Express probe, has discovered a large saltwater lake a kilometre and a half below the ice of the Red Planet‘s South Pole, according to a new article in Science journal.
The discovery was presented by the Italian Space Agency (ASI), the National Astrophysics Institute (INAF), the universities of Roma Tre, La Sapienza and Gabriele d’Annunzio (Pescara), and the National Research Council (CNR). The lake can support life, Italian researchers said.
It is what they called a “biological niche”. They said it had been there for a “very long time”. Roberto Orosei, INAF’s Bologna Radio-Astronomy Institute head, told ANSA that Mars “will tell us if we are alone in the universe”.
“Now it’s a question of knowing whether the planet has ever been able to host life”, he said.