New Yorkers love street food as much as they love Italian cuisine and some young Italian entrepreneurs decided to make them very happy by allowing them to buy high quality traditional Italian food from  high-tech food trucks. Because of this street food revolution, we can forget the typical image of old smelly vans dripping with oil and fat. Today food trucks are indeed gourmet food stations where traditional recipes meet culinary experimentation to create, with top quality ingredients, gems of flavors and consistencies that can be enjoyed on the go. 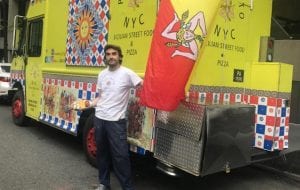 One of the Italians who chose to bring the Italian cuisine in the streets of the Big Apple is Alessandro Capuano, a Neapolitan from the Ponti Rossi neighborhood. He graduated in Economics and Finance but decided to leave his job in a bank in Milan to move to New York and devote himself completely to the world of food opening his first food truck, called ‘Ponti Rossi‘, in 2013. Thanks to him, on the streets of Manhattan, it is possible to enjoy a true Italian menu based on pasta prepared with strictly Italian ingredients. ‘Ponti Rossi’ has been such a success that Capuano is about to open a second food truck: it will be called ‘Capuano’s’ and it will serve the real Neapolitan pizza and the tradition of Neapolitan fried street food – squid, zucchini, etc..

To taste different flavors and appreciate the best of the Sicilian street food tradition – Palermitan-style anelletti pasta, bread and panelle, caponata, pizza, arancini, and cannoli –  we need to look for ‘Picciotto‘, Alessandro Ancona’s food truck. The chef and pizza maker from Castellammare del Golfo (Trapani) worked his way up in the kitchens of his hometown and in Riccione before moving to New York in 1998. Here, after working in the kitchen of a Sicilian restaurant and managing a pizzeria, he went for a big change and in 2016 he opened his successful food truck, which from May to October can be found in Midtown and the Financial District.