Creativity is an essential element of haute cuisine, however, there are dishes that are so successful and requested by customers that become the quintessential representation of a chef’s art. These signature dishes are regularly featured in the menus of starred restaurants that have at the basis of their identity the creations of their famous chefs. Only some of these must-have recipes are allowed to be temporarily left out of the menu in respect of the ingredient’s seasonality. Let’s see what are the signature dishes of some famous Italian chefs. 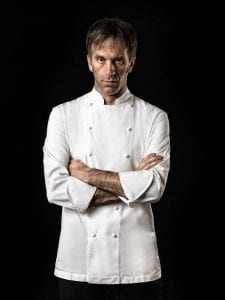 Davide Oldani’s ‘Riso allo Zafferano’ at D’O (Milan) – The king of ‘Pop Cuisine‘ values simplicity above all and he revisited the traditional ‘Risotto alla milanese’ simplifying the recipe so to bring out the full flavor of the two main ingredients, rice and saffron. Not only he reduced the number of ingredients of the main recipe, but he also devised the most gentle way to prepare highly selected Carnaroli rice and Italian saffron to fully respect their integrity and allow them to release their delicate and enveloping aromas. 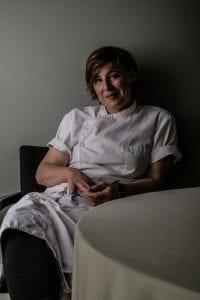 famous for her use of wild herbs. For this reason, this delicious polenta is available on the menu of her starred restaurant only when the ‘Sclopit’ – the local name for the Silene Vulgaris, commonly known as Bladder Campion – is in season. In this recipe, the soft polenta turned into a cream cooking it with silene butter and served with poppy seeds, sour cream, wild violets and a swirl of extra virgin olive oil.

Niko Romito’s ‘Assoluto di cipolle, Parmigiano e zafferano tostato’ at Reale (Castel di Sangro, AQ) – In 2009 three-star Romito created a masterpiece: the ‘Onion reduction with Parmigiano buttons and toasted saffron’. A first course of fresh egg pasta stuffed with a Parmesan cream served with an onion reduction in place of broth. Since then, this recipe is always on the menu, even if with constant minor adjustments  that do not distort the original recipe, but that are perceptible to a careful taste. Also, the onion reduction marks the beginning of the chef’s work on extraction, which has proved to be essential in his gastronomic growth.

Antonello Colonna’s ‘Negativo di Carbonara’ at Resort&Spa (Labico, Rome)
In the 90s, the dynamic starred chef Antonello Colonna created a dish that has become one of the cornerstones of Italian gastronomy, the ‘Carbonara inside out’, which pays homage the Roman culinary tradition with a revolutionary twist. Here the eggs and cheese mix is the filling of squares of pasta closed to form ‘ravioli’, which are subsequently decorated with browned guanciale.

Previous Post Celebrating 'The Year of Leonardo' in Rome
Next Post 'Ristorante Gelato', where gelato is everything but a dessert