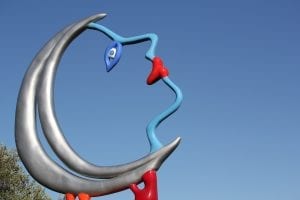 Tuscia, one of the most fascinating although lesser-known areas of the Italian peninsula, is located between Tuscany and Lazio and is rich with culture, traditions, and art. One of its treasures is an artistic park enshrined in Capalbio, in the province of Grossetto, and known as ‘Il Giardino dei Tarocchi’ – Italian for the Tarot Garden. Designed by the Franco-American artist Niki de Saint Phalle, the park is populated by great statues of the figures appearing on the tarot cards and characterized by a pervasive maternal feminine presence.

Inspired by her visits to Antoni Gaudí’s Parque Guell in Barcelona and to Park of the Monsters in Bomarzo (another of Tuscia’s jewels in the province of Viterbo), Niki de Saint Phalle began the construction of the Tarot Garden in 1979 dedicating 17 years to the design and construction of the twenty-two imposing figures in steel and concrete covered with colored glass, mirrors and ceramics. She did all of this aided by  several skilled workers, a team of famous names of contemporary art, her husband Jean Tinguely, and Roman ceramist Venera Finocchiaro. Architect Mario Botta, in collaboration with architect Roberto Aureli, designed the entrance pavilion – a thick enclosure wall with a single large circular opening in the center, designed as a threshold that clearly divides the “magical” 2-hectare Garden from everyday reality. 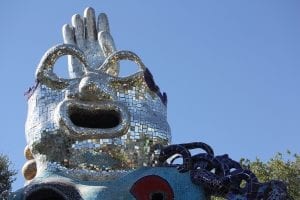 The central square, surrounded by the greenery and Pierre Marie Le Jeune’s sinuous benches, is a sort of large amphitheater dominated by the colorful sculptures that immediately give a sense of enchantment, fascination, playfulness, and of the splendid visionary spirit that animates the whole garden. Even the roads that take off from the square play a fundamental role in the work; in fact, Niki de Saint Phalle has indelibly recorded on the cement that covers them notes of thought, memories, numbers, quotations, drawings, messages of hope and faith, unraveling a path that is not only physical but above all spiritual.

‘Il Giardino dei Tarocchi‘ is the materialization of the close union between art, architecture, and nature, tradition and contemporary, colors and shapes, material and spirit.