On October 31st 2019, the Academy of Italian Cinema David di Donatello Awards together with the Office of Academic Initiatives and Strategic Innovation at The Graduate Center of The City University of New York and Queens College, CUNY brought Italian and American filmmakers to New York City for the launch of the second edition of the Academic Festival IC-CUNY (Italian Cinema CUNY). 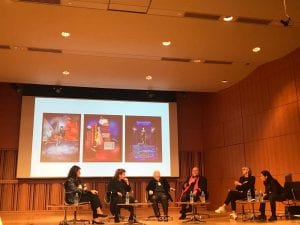 The Festival was founded in 2017 by Eugenia Paulicelli, Professor of Italian Studies and Comparative Literature at The Graduate Center, CUNY and Queens College. IC-CUNY is an educational project that seeks to foster a deeper understanding of the art of Italian cinema from its origins to the present day. In 2019, Massimo Mascolo, creative producer and David di Donatello Awards consultant, joins IC-CUNY as associate director.

The event opened with a moment of celebration of the Italian Film Awards’ origins, in collaboration with BVLGARI and concluded with an illustrated conversation with film producer Roberto Bessi and the screening of a short film by Anna Tilli from the Centro Sperimentale di Cinematografia, Rome on costume design. A special celebration of the David of Donatello Awards has been hosted by BVLGARI on the same day. The opening night is followed by two subsequent masterclasses on contemporary film and fashion design, opened to the public. 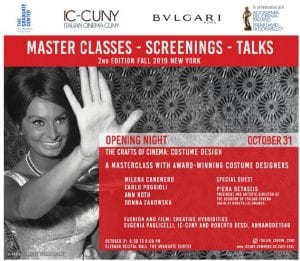 On Wednesday, November 13 and Thursday, November 14, the second masterclass “Contemporary Italian Cinema” will feature screenings of the new Made in Italy Series Cesare Attolini: Made in Naples, presented by Eugenia Paulicelli, Massimo Mascolo, and Claudio Napoli, and Stolen Caravaggio (Una storia senza nome, dir. Roberto Andò, 2018). Each screening will be followed by a discussion.

The final masterclass, “Hybrid Intersections: Fashion, Costume, Cinema and Television” will be held on Thursday, December 5, and will feature screenings and discussions with top filmmakers, costume designers Daniela Ciancio and Costume Concept Artist Christian Cordella, as well as fashion scholars.

For more details about the masterclasses and how to participate: Italian Cinema –
CUNY (www.gc.cuny.edu/Italiancinema)