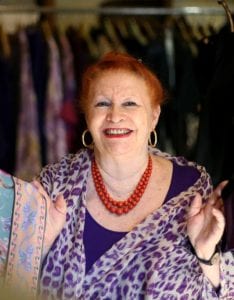 Milanese designer Giuliana Cella, does not create fashion, she creates a style. Cella’s career started back in 1993 gaining immediate success both with the public and the media. Journalists coined the term ‘ethno-chic‘ to define her genre, and although many designers started to copy it, she always remained a reference point for this look. 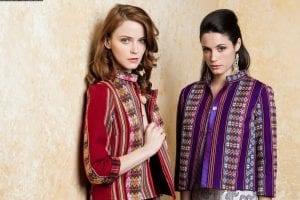 Cella is known as the expert of jewels and ethnic fabrics and she considers herself a researcher more than a stylist. Indeed, “the queen of ethno-chic”, as the  Financial Times defined her for the creation of her unique pieces, searched precious and rare fabrics across the world, to then bring them to life with her Italian tailors.  “I traveled the world to find fabrics of rare beauty – she said – and I was inspired by the cultures of the various countries: Russia, Rajasthan, Laos, Cambodia, Burma, Ghana, Persia, Africa, South America, and the Caribbean.” Her free spirit, that is unconstrained by fashion standards, always allowed her to showcase her travels, and the inspirations she found in them, in her extraordinary designs. About her creations, she said: “I draw patterns, embroideries, applications. I make exclusive items (at a ready-to-wear price). I have always wanted to accustom consumers to wear something that is steeped in history and culture.”

Cella’s collections have earned the approval of international celebrities, including actress Franca Rame, music-icon Ornella Vanoni, and writer Alicia McKenzie. With her exhibitions, she even brought fashion into several museums, she was the first designer to whom the European Parliament in Brussels opened its doors for a retrospective exhibition, has collaborated with the historical theater of the Bolshoi in Moscow, for the study of ballet costumes, and she has been the only Italian designer to be officially invited to show her fashion jointly with Dior at the prestigious Nevsky Palace in St. Petersburg.

Previous Post Truffle, high gastronomy, wine, and culture in Alba
Next Post The Wrong Negroni in the designers' bar in Milan