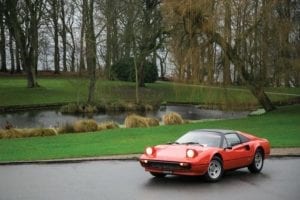 The 1978 Ferrari 308 GTS that will be sold in an auction in Monaco on May 12 by RM Sotheby used to be the one driven daily by no one less than Gilles Villeneuve, “the fastest driver in the history of motor racing”, as his teammate Jody Scheckter called him. Villeneuve spent six years in Grand Prix racing with Ferrari, winning six races and widespread acclaim for his performances and his flamboyant driving style.

Maranello built over 13,000 308 GTS over the course of a decade’s worth of production, but this one is more special than the rest, and it will likely sell for much more too – not because it has different specs, but because of its owner. The car will be sold without reserve and while no estimate is given, considering that it belonged to the French-Canadian driver, it could be sold for as much as three times the current market value for the model, which is about $80,000.

Ferrari launched the 308 GTS in 1977 at Frankfurt Motor Show, and the specimen for sale on May 12 was a personal gift from Enzo Ferrari to Villeneuve, who debuted with the Scuderia on the same year. 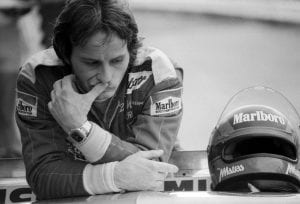 Enzo Ferrari had the car built with a beefier clutch from the V-12-powered 512 Berlinetta Boxer, according to RM Sotheby’s, among other unspecified “modifications.” Following Villeneuve’s tragic death at the 1982 Belgian Grand Prix, the car was kept by Ferrari for two years, then sold to its second owner in Modena. The current owner of the orangey Rosso Dino 308 GTS is a Danish collector who bought the car in 2010.

Previous Post #CarbonaraDay, to celebrate the most controversial and loved pasta dish
Next Post La Quercia 21: quality and originality at your service