‘Gallo’ and the Leaning Tower of Pisa for NBA 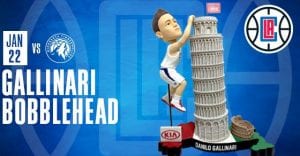 The LA Clippers have one of the most prominent Italian players to compete in the NBA in Danilo ‘Gallo’ – rooster in Italian – Gallinari, and in his honor on January 22, in the occasion of their game against the Minnesota Timberwolves, they hosted the Italian Heritage Night.

To the fans purchasing tickets using the promo code ‘Italy’, the team offered a special discount and the chance to be eligible to receive a commemorative Italian Heritage Night t-shirt. Moreover, the first 10,000 fans to arrive at the game have been surprised by the hosting team with a bobblehead, courtesy of Kia, featuring Danilo Gallinari dunking on the Leaning Tower of Pisa in Italy. 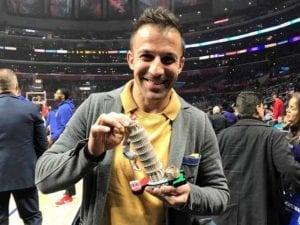 One of the lucky 10,000 was former Juventus and Italian National soccer player Alessandro Del Piero, who went to enjoy the basketball game with his son. Following the giveaway, the Clippers hosted pre-game and halftime activities that included traditional Italian performances.

Gallinari is the most acclaimed Italian players in the NBA, and the Leaning Tower of Pisa is the best known symbol of Italy throughout the world, together they well represent the artistic spirit of their country, both in sport and architecture.