One of the many ways to celebrates Alberto Sordi (1920-2003) 100 years after his birth, is to enjoy some of the most memorable scenes of his movies. These are great examples of his great ability to portray moods and psychological characteristics with simple gestures and lines. And often this happens in front of food. In fact, the relationship with food is often used as a metaphor, for better or for worse, for social conditions. Here are two of the most iconic scenes that  revive the memories of the emotions Sordi gave to his public. 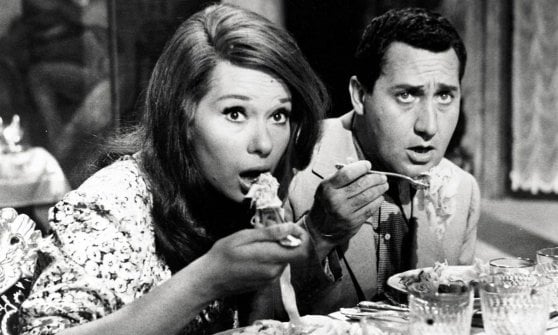 The first of them is without any doubt the ‘macaroni‘ scene in Steno’s ‘An American in Rome‘ (Original title ‘Un americano a Roma’). Sordi is Nando a young born and bred Roman who dreams to live in the US. He is a connoisseur of the American world as represented in movies. And he pretends to be American to the point of imitating the sounds of the American language. One night arriving home late he finds the plate of macaroni and wine his parents left for him.

He initially scorns the dinner saying that he’s American and he eats American.

He prepares an unlikely sandwich with jam, yogurt, and mustard before realizing that it tastes awful. At that point, he turns to the macaroni to eat them in revenge for them provoking him.

In 1962, black comedy ‘Mafioso‘ by Lattuada, Sordi plays a Sicilian who lives in Milan. He takes his Milanese wife and children on holiday in his rustic home-town and distinction in ways of life is immediately evident. In one scene there is a huge table full of all sorts of food and all the members of the extended family are stuffing their faces. Sordi’s wife, at one point, lights a cigarette, everyone stops to look at her.  She asks if they are bothered by the smoke. However, Sordi explains to her that they are not used to seeing a woman who smokes. So she says: “Oh, well, everyone has their habits. I smoke a cigarette at the end of the meal“. Everyone bursts out and warns that what they had was just the starter. The first course had still to come.