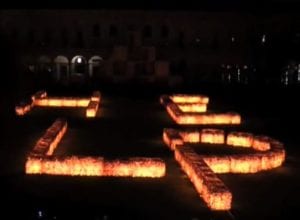 Tuscan architect, artist, and designer Maria Cristina Finucci, founder of the Garbage Patch State, created a work that inevitably became the beating heart of the Milan Design Week Fuorisalone. The ‘HELP THE PLANET. HELP THE HUMAN‘ installation at the center of the charming main courtyard of the University of Milan, until April 14, lights up as an open wound, a vivid reminder of our planet’s suffering.

The giant letters that spell the word ‘HELP’ are made of 5 million colored bottle caps collected all over the world – for a total weight of over two tons of plastic – enclosed in red nets food bags and contained in wire mesh gabions. The work – already exhibited last year at the Roman Forum and on the Sicilian island of Mozia in 2016 – is a cry to launch an unequivocal message to the humankind: act now to stop the environmental disaster that is killing the precious blue oceans of the blue (so far) planet.

Officine Maccaferri, which made the mesh of the gabions, through a three-year-long work alongside Finucci, keeps pursuing its commitment to support the environment. Alessandro Maccaferri, president of the Emilian company, said: “For us, it is very important to be able to support art if this has also a social motivation, as in this case, because our product is basically a product that is used and serves to help preserve the environment. This is what we work for.”

Talking about her installation, Finucci explained exactly which is her social motivation: “I believe – Finucci said – that an artist should take charge of these needs of the Earth. Personally, I try to give a voice to the plastic in the sea and to Nature that cannot speak through this installation that represents a crack in the Earth that bleeds, and it bleeds plastic, so it is the Earth that asks humans for help.”