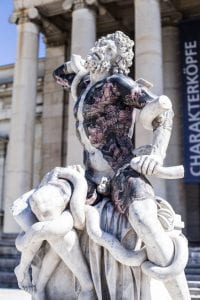 Tattooed statues, tires, the Pietà with a black Christ, a sailable 253-pound boat: For more than 20 years, Viale has been working with marble, giving the material lightness and life. Here is the story of a visionary artist.

It spies, amazes, makes you think. The art of Fabio Viale leaves no room for indifference: matter is his challenge, transformation his aspiration. Viale does not set limits. When it comes to marble, he only sees possibility waiting to be discovered.

Eccentric, perhaps. Provocative, when needed: Fabio Viale – sculptor since he was 16 years – manages his talent with the maturity of those who know that art is not made simply to be displayed in a glass case, but must break the glass to be introduced to those who contemplate its message. Art must have something to say, it is not meant to be silent. Viale’s communication instrument is marble, its hardness and apparent immobility: heaviness becomes light in his hand, rigidity becomes modular, sculpture filled with soul. His language is an oxymoron, not contrast, but complete.

Your life was linked to marble when you were 16 years old. What are the challenges for an adolescent when sculpting such an apparently hostile material?

I believe that it is not so much a challenge, at least at the beginning, it was rather an inevitable approach. Something that later I discovered to be a talent, an inevitable inclination. A high school professor asked me to consciously handle a material. I found it intriguing, alchemical, and since then I have not stopped. Only later did the word ‘challenge’ preface my idea of ​​sculpture and marble.

You shape marble to evoke famous classical sculptures, but the reference to Greek and Renaissance antiquity is not a tribute in the strictest sense. Is it a reinterpretation or a fracture? 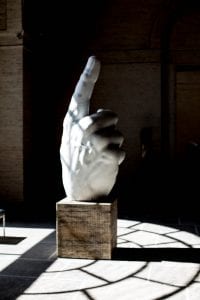 Both. Often my works are close references to great, historic masterpieces. That is when they fall into the ‘Souvenir’ cycle, taking into account the will to entirely or partially own a masterpiece: Souvenir Gioconda, Souvenir David or Souvenir Pietà, among the others. Other times are works with a classical form with a less precise reference to existing sculptures with the same intent to create a shift in sense. A new semantic dimension. Made from polystyrene or covered with tattoos, the candor of marble, the classicism of the material, the purity, is linked to a perceptual displacement that associates a current language often linked to the world of violence. That is the case of Russian prisoner tattoos or the Japanese mafia, Yakuza: Yours will be our o Kouros, represented by fists or busts.

The surface of your statues is covered with madonna tattoos, skulls, pistols and other signs that make up the complex code the Russian criminal community. What does this symbolic meeting say?

The force of disorientation. It is a collusive compromise between the significance of marble-related meanings and the classicism of cruel violence. Ideally, art fulfills its great symbolic task of synthesis: through a single product, two worlds are condensed, manifested in a sculptural miracle and the harmony of design.

Does the juxtaposition of the sacred and the profane still generate disorientation?

In a metaphorical sense, the association of worlds apparently in contrast creates wonder: it is a part of the work. It is not so much the sacred and the profane, but rather classifications of the history of images, of universal iconoclasm and of their reinterpretation which, creating displacement, generate closeness and curiosity. The creative outcome of my works has an absolute character, sustained continuously drawing on well-known semantic basins, perpetually subject to misdirections. Tires for example, a familiar and commonly-used object, are not only ringed, embodying a visual short-circuit of the Infinite, but they are also designed to wear down so they remain true to their truth. Deconstructing the preciousness of marble to become low-value. In this case, it is metaphorically interesting to speak of sacred (marble) and profane (worn-out object) synthesized.