For the first time, the public will have the opportunity to visit the 1930s Roman villa of the actor

Over 10,000 people have already booked a visit to the exhibition that celebrates Alberto Sordi (1920-2003) 100 years after his birth. The ‘Il Centenario – Alberto Sordi 1920-2020‘ exhibition, curated by Alessandro Nicosia, will take place from March 7th to June 29th. Visitors will have the opportunity to remember the actor through  many objects and works of art in a unique setting. 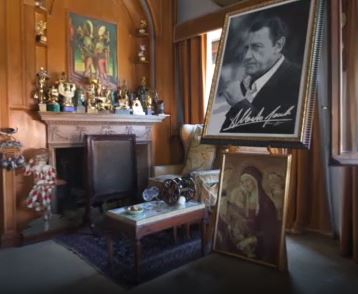 For the occasion, the Roman villa of the actor will be open to the public for the first time.

The legendary villa, designed in the 1930s by Clemente Busiri Vici, is in Numa Pompilio square hidden in the greenery of Caracalla. Sordi immediately fell in love with it when he first visited it in. So much so that he bought it only a few hours later. This is an exceptional location for the exhibition dedicated to Sordi. And it will allow fans to immerse themselves in the daily life, passions, and secrets of the famous actor. The unprecedented exhibition unfolds between the rooms of the house and the garden to illustrate the actor’s long career and life. It does so through unpublished documents, objects, clothes, photographs, and  videos. Moreover, Teatro dei Dioscuri will host a section of the exhibition focusing on “Storia di un italiano”, the 1970s TV program which Sordi was particularly fond of.

For the Rome mayor Virginia Raggi, it is a big party that Rome wants to dedicate to Alberto Sordi. For the first time, the actor’s home, where he lived and where his story of man and artist is kept, will be open to the public.  A villa that is part of the historical heritage of the city and which, thanks to Aurelia Sordi’s commitment, has been transformed into a precious medium for the dissemination and promotion of culture.

For Rome, this is not only an opportunity to remember Sordi as a friend but also one to revive the stories and emotions that he left to his public.

Previous Post Bellosi's film at the Berlin International Film Festival
Next Post Kobe Bryant, an American legend with Italy in his heart