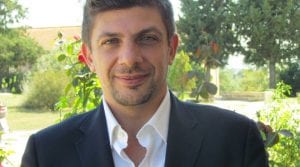 Mairead Corrigan Maguire, the Northern Irish peace activist who co-founded, with Betty Williams and Ciaran McKeown, the Community for Peace People, was awarded her Nobel Peace Prize in 1976. As Nobel Peace Laureate, she decided to nominate the Italian journalist, Enzo Cursio for this year’s edition of the award in recognition of his inspirational work for peace, human rights and disarmament. The prestigious nomination is the first step in the awarding of the Nobel Peace Prize, which requires Nobel Prizes Laureates and other important personalities to submit the candidacies of their choice to the Norwegian Nobel Committee by February 1 of each year. Maguire said: “In nominating Enzo Cursio for the Nobel Peace Prize, I am confident he meets the criteria in Alfred Nobels Will when he left his prize for the Champions of Peace, a title which I believe is so well earned by Enzo Cursio.”

Enzo Cursio, born in Viggiano (Potenza) in 1968, is not only a journalist, but also a human rights activist, and he currently works at the Food and Agricultural Organization of the United Nations as Coordinator of the FAO Nobel Alliance for Food Security and Peace. He has promoted and organized more than 30 international conferences aimed at building dialogues between states and national institutions, co-organized the World Summit of Nobel Peace Laureates, contributed to strengthen the co-operation between Nobel Peace Laureates and heads of state, human rights activists, and International Institutions. 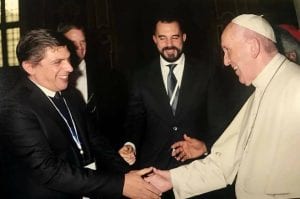 He recently co-organized in the Vatican the Symposium on Nuclear Disarmament, a conference of UN representatives, Nobel Peace laureates, religious leaders and representatives of the civil society working peace, nuclear disarmament, and demilitarization.
Cursio believes passionately in World Peace and that “World peace is possible only if we have faith and if we act selflessly and tirelessly to achieve it.”