Discovering the Milanese waterway by gondola 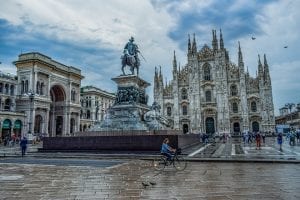 A new way to discover the wonders of the capital of Lombardy is becoming more and more popular with tourists: gondola tours on the Navigli. The system of navigable and interconnected canals around Milan and Lombardy was once used to transport any kind of goods; today the Naviglio Grande is daily cruised by tourists Umberto Pagotto’s gondola.

A Milanese insurance broker and Venetian rowing instructor, Pagotto recovered and restored a typical Venetian boat and became a gondolier. The tours that visitors can enjoy on his gondola, thanks to Canottieri San Cristoforo, lead to the bell tower of the small Romanesque style church of San Cristoforo, which with its little tree-lined square appears as a postcard from the past. In the 15th century this bell tower, which still beats the hours with authentic bells, was considered, by boatmen arriving from the Ticino river, the lighthouse that indicated the proximity to Milan. As time passed and the city grew, this area became part of it and turned into a district that was swarming with factories, especially kilns and laundries. 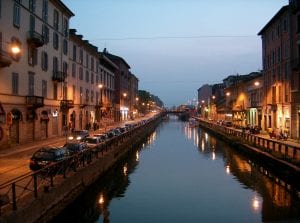 Today the tours offered by Canottieri San Cristoforo are more and more in demand and they contribute to increasing the appeal of this area, becoming new an extraordinary resources to further increase tourism in a place that charmed even Leonardo da Vinci. Indeed, he studied the hydraulic engineering works and the waterway that played a decisive role in the creation of the extraordinary Duomo of Milan allowing the delivery of marbles from Candoglia and Viggiù.

On top of Pagotto’s gondola cruises, other initiatives have been launched to enhance these waters and these canals. A few months ago the Around Richard association was founded, bringing together artists, traders, and artisans to relaunch and enhance the activities of the neighborhood of the former Richard Ginori factory with showrooms and ateliers of artists and designers.