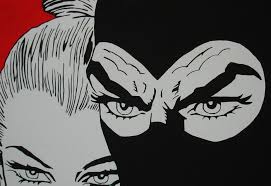 On the occasion of the release of the latest comic book, in collaboration with Marco Lucchetti Art Gallery Lugano, ONO contemporary art set up ‘Diabolik: Lui e Lei‘ (Diabolik: Him and Her), a retrospective dedicated to the most famous thief in Italian comics through the works of some of his most important designers : Giuseppe Palumbo, Matteo Buffagni and Stefano Babini.

Published by the Milanese publishing house Astorina, Diabolik was born in 1962 from the pen of Angela Giussani, soon to be joined by her sister Luciana. Diabolik owed his success to its noir theme and the evolutionary ability of his character that matures and changes over time, together with his counterpart female: Eva Kant. The two met in the third issue when Diabolik tries to steal a ring from Eva, and she immediately becomes his partner. Even Eva’s character undergoes an important evolution over time, moving from a subordinate role in the relationship with Diabolik to become part of a relationship where they enjoy perfect equality both from a sentimental point of you and ‘on the job’. Over the years Eva emancipated and evolved, becoming the mirror of the evolution of society, a modern model of style and femininity. 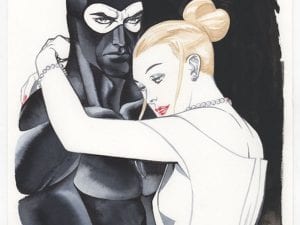