Crepax and his representation of speed 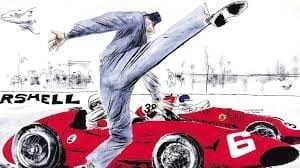 “Crepax 300 all’ora” (Crepax 300 per hour) is the title of the exhibition of the works of Guido Crepax dedicated to the world of speed and car racing. After the success obtained in Cortina, the exhibition arrived in Turin where it will be on show, until September 21st, at the Little Nemo Art Gallery. A unique opportunity for both comic strip lovers and vintage car fans to admire the racing cars drawn by the Italian comics artist. 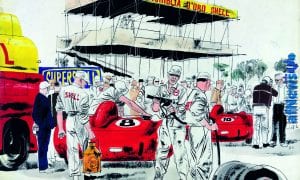 Guido Crepax (1933 – 2003), whose real name was Guido Crepas, is internationally famous for his character ‘Valentina’, who he portrayed in 27 comic books, but, before creating her, his sophisticated drawing vividly rendered the excitement of speed, in particular, that of racing cars. This lesser-known aspect of the artist is the focus of the exhibition currently on show at the Little Nemo Art Gallery, which gathers the original works realized by Crepax in the 1960s with the aim to describe a racing car’s life cycle. The author himself once described these series as his “true professional launch”, and today they are considered extremely rare and, for this reason, they are highly desired by collectors from all over the world. On exposition, there is also a selection of automotive advertising illustrations and the original paintings for the program’s frontispiece of the 1964 Gran Premio di Monza. And even the fascinating ‘Valentina’, who appeared for the first time in 1965 in a comic titled ‘La curva di Lesmo’ (referring to a curve of the Italian Formula 1 Grand Prix of Monza), will be represented in a few selected original arts and illustrations.