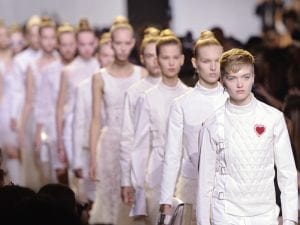 The surrealist-inspired haute couture show, designed for Christian Dior by Italian chief designer Maria Grazia Chiuri, took place on Monday afternoon at the Musée Rodin for the Paris’ Haute Couture week. Chiuri drew her inspiration from the work of the Argentinian artist Leonor Fini, who lived many years in Italy before working with Christian Dior himself in the 1930’s.

Viewers were drawn into a surrealist dreamworld by models walking on a checkered catwalk in black-and-white hypnotic patterned looks – with names such as Vertigo, Psychose, Illusion – with body tattoos spelling out “Attitudes Spectrales”, and beautifully constructed black facemasks created by the milliner Stephen Jonesin. All under sculptures of giant noses, ears, eyes, and hands suspended from the ceiling and evoking the disjointed body parts often depicted by famed Surrealists like Dalì and Magritte. The silhouettes chosen by Chiuri contributed to the dream-like feel with their geometric patterns or swirls and the simple and functional elegance of capes and gowns featuring waspy, see-through fabrics and feathers.