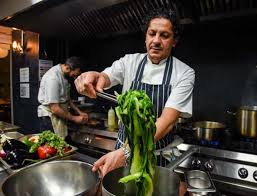 Chef Francesco Mazzei, from Cerchiara di Calabria, conquered the heart, and the taste buds, of Londoners and Britons with his Calabrian cuisine. Thanks to the masterpieces prepared in his three restaurants in London, his participation in two TV programs broadcast by BBC, and the success of his book, he is now known as ‘the King of ‘nduja’ (Calabrian spicy sausage made of pig liver, fat, and lung).

There are plenty of Italian restaurants in London, but only Mazzei’s ‘Sartoria’, ‘Fiume’, and ‘Radici’ can boast such an incredible cuisine as the Calabrian one made with great authentic raw materials and overwhelming passion. The wholesome, hearty, and rustic recipes are made with the very best fresh and vibrant ingredients imported directly from Calabria, like Caciocavallo Silano and Tropea Onion, with wonderful Italian wines served alongside. All enhanced by Mazzei’s creativity that generates works of art such as his ‘Fillets of wild boar marinated in licorice, bergamot and chili’. 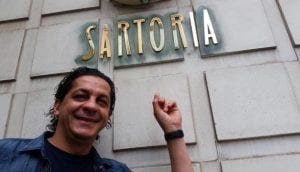 ‘Sartoria‘ (‘tailor’s shop’ in Italian) is the name of the restaurant in Savile Row, the world most famous suiting street, which reopened in 2015 following the refurbishment saw the addition of a new bar and shots counter, an impressive wine cellar and a new terrace to watch the Mayfair world go by. ‘Fiume‘ (‘river’ in Italian) is right on the bank of the River Thames in Battersea Power Station’s Circus West Village and its scrumptious southern Italian dishes can be enjoyed on a large Mediterranean piazza-style terrace with an incredible view on the river. ‘Radici‘ (‘roots’ in Italian) gives the opportunity of a full-immersion in the relaxed and welcoming atmosphere typical of a Southern Italian trattoria, like the ones Mazzei appreciated during his upbringing.

Moreover, Mazzei extended his popularity by appearing frequently on BBC shows including Saturday Kitchen and MasterChef,  Masterchef Uk, to introduce a wider audience to his creativity. A task that he greatly achieved with his successful book “Mezzogiorno”, which climbed the English sales charts.