The Renaissance master’s hometown, Urbino, Rome, and London honor him with special exhibitions 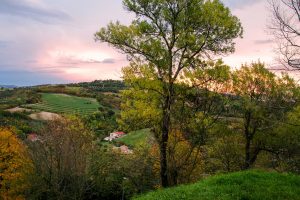 The hills of Urbino, Marche

In Urbino, he breathed art from a very early age in his father’s studio. And in the city he found the cultural environment that allowed him to blossom as the genius he was. Famous for the supreme grace of his portraits and Madonnas, Raphael with Leonardo and Michelangelo form the great trio of the High Renaissance art.

The Galleria Nazionale delle Marche, in Urbino, celebrates the important anniversary of the illustrious citizen with a special exhibition. Until January 19th, ‘Raphael and the friends of Urbino’ investigates and tells the world of Raphael’s relations with a group of industrious artists. Their artistic dialogue, from different positions and stature, accompanied the master’s transition to the modern manner and its stylistic developments also during the memorable Roman season.

In the Italian capital, his major work was for the popes, including a series of dramatic frescoed rooms in the Vatican. And Rome will host the most important show of Raphael’s anniversary year at Scuderie del Quirinale from March 5th to June 2. With over 200 masterpieces never before gathered together – 50 of them on loan from the Uffizi -, ‘RAPHAEL’ constitutes the high point of the commemorative celebrations with paintings, drawings, and works for comparison.

London will honor the artist later on in the year. From October 3rd, 2020, to January 24th, 2021, the National Gallery’s exhibitions will explore Raphael’s complete career.

The show will present his paintings and drawings but also his work in architecture, poetry, design for sculpture, tapestry, and prints. On show, there will be the gallery’s 11 Raphaels as well as loans from the Louvre, Vatican Museum, Uffizi Museum, National Gallery of Art, Washington, and the Prado Museum.

Previous Post 'Once upon a time Sergio Leone' in Rome
Next Post Befana, the old lady that brings an end to the holiday season