#CarbonaraDay, to celebrate the most controversial and loved pasta dish 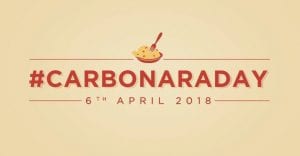 Everyone loves carbonara. According to a research by Doxa-AIDEPI, carbonara is the absolute favorite dish for 18% of Italians, and one of the 3 Millenials’ favorite recipes with baked pasta and spaghetti with tomato sauce. However, there is no general consensus on the recipe, and it seems that in almost each family and restaurant it is prepared in a different way. Guanciale, pancetta, or bacon? Pecorino, Parmigiano, or a mix of the two? Extra virgin olive oil, or not? Cream, or not? Long, or short pasta shape? The whole egg, or just the yolk? Garlic, onion, or nothing?

Even trying to question its origins can trigger conflicts. Many believe it is a completely Italian dish and identify the etymology of its name in the fact that it was the typical lunch of the Apennines coal (‘carbone’ in Italian) burners, in the fact that it was invented by a cook from Carbonia (Sardinia) who worked in Rome, or in the fact that the pepper rain that covers the pasta looks like coal dust – all more or less plausible, but not verifiable hypotheses. However, others – like Marco Guarnaschelli Gotti, curator of the Grande Enciclopedia della Gastronomia – belive that it was invented in 1944 by American soldiers who combined the powdered eggs and bacon from their K-ration with Italian pasta. 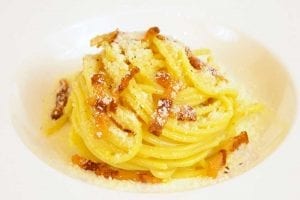 Despite all controversies, carbonara lovers all over the world today are united in celebration of their (own) favorite recipe under the hashtag #CarbonaraDay, a virtual event organized by AIDEPI (Association of the Italian Sweets and Pasta Industries) and IPO (International Pasta Organization), which last year collected over 29,000 interactions on social medias and involved 83 million people worldwide.