‘Canova | Washington’ on exhibition in Possagno 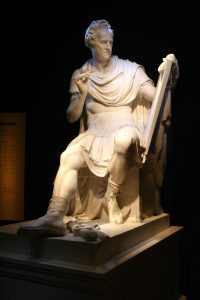 Antonio Canova (1757-1822) has been the foremost neo-Classical sculptor of the late 18th and early 19th centuries and was highly celebrated while he was alive. For this reason, in 1816, he was commissioned by Thomas Jefferson to produce a statue of George Washington for the North Carolina Statehouse depicting him as an ancient Roman leader writing his farewell address. The sculpture was unveiled in 1821, but only ten years later a fire destroyed it, leaving behind charred fragments.

The Frick Collection, in the past year, borrowed a full-size plaster model of the monument, as well as draft sketches, related engravings, and drawings from the Museo Canova in Possagno (Treviso), where they have recently returned. The museum dedicated to the artist in his home-town celebrates this return with an exhibition entitled ‘Canova | Washington‘ that will be on show until April 28, 2019.

The exhibition retraces the story of the lost masterpiece, probably the least known public monument among those created by Canova. Curated by Xavier F. Salomon – head curator of the Frick Collection -, in collaboration with Mario Guderzo – director of the Gypsotheca and Antonio Canova Museum, of the Venice International Foundation, and of Friends of Venice Italy -, the exhibition displays also a portrait of Canova painted in 1816 by Thomas Lawrence.

Previous Post Hazelnut spread: Nutella is not the only one
Next Post BRERAMILANO1930, the luxurious panettone to be enjoyed all over the world