Burri and Fontana at the upcoming New York Evening Sale

The Italian art returns to the market with some masterpieces signed by major 20th-century artists included in the catalogs of the autumn auctions of contemporary art in New York. Alberto Burri and Lucio Fontana will be the starts of the show, but works of several important artists will go on auction including Morandi, Stingel, and Pomodoro.

On November 15th, all the eyes will be on Phillips’ Evening Sale of 20th Century & Contemporary Art that presents Burri’s ‘Grande legno e rosso’ (1957-1959). The monumental and engaging masterpiece with an estimate between $10 and $15 million may well beat the artist’s current record at $ 11,549,600. It extends for 2.5 meters wide and is one of the first works in which Burri introduces the combination of wood and fire. ‘Grande legno e rosso’ was previously exhibited only on the occasion of the great retrospective that the Guggenheim Museum dedicated to Burri 3 years ago, and it has remained in the same private collection for over 50 years. 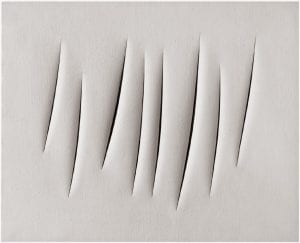 Another major work of Italian contemporary art will be auctioned by Sotheby’s on November 14th, ‘Concetto Spaziale’ (1964), one of Fontana’s oils with gilded metal. A work that embodies the essence of the father of Spatialism’s art, who, as usual, made an inscription on the back of his work: “l’oro è bello come il sole” (gold is as beautiful as the sun). Coming from the collection of Judith E. Neiesser, who bought it in 2004 from the New York dealer Anthony Grant, this ‘Concetto Spaziale’ is presented in the catalog with an estimate between $1.5 and $2 million. In the past, it has been exhibited also in the retrospective that the Center Georges Pompidou dedicated to Fontana between 1987-1989.

Previous Post Marchesi and the Great Italian Cuisine World Tour
Next Post In Capri, the villa where Totò lived is up for sale