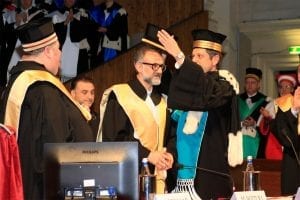 Carrara University awarded to chef and philanthropist Massimo Bottura an honorary degree from the Academy of Fine Arts. Bottura received his recognition from the Academy Director Luciano Massari during the same ceremony in which artist Maurizio Cattelan received the title of Honorary Professor of Sculpture. Incidentally, the two of them are such good friends that the chef’s debut cookbook, ‘Never Trust a Skinny Italian Chef’, opens with a conversation between him and Cattelan.

“Ludwig Wittgenstein believed that the ‘beauty’ and the ‘goodness’ were complementary. They are two sides of the same coin: ‘beauty’ without the ‘goodness’ is not beautiful at all, and ‘goodness’ needs ‘beauty’ to deliver its message.” Bottura quoted the German philosopher in his speech, during which  the cuisine artist described gastronomy as the merging of ethics and aesthetics, talked about culinary traditions as a legacy to be carried forward overcoming of the past, painted the restaurant as a renaissance workshop and cradle of new ideas, and illustrated his vision of gastronomy as a universal language and as an opportunity of social justice. 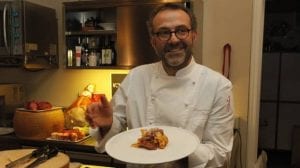 The cuisine of Bottura’s three Michelin-starred restaurant, ‘Osteria Francescana’, is considered one of the most influential ones in the world, and in it art plays a fundamental role. There, the references to the greatest contemporary artists from which have inspired the dishes, go hand in hand with numerous paintings, photographs, and sculptures by international artists. All of the above turn ‘Osteria Francescana’ into a small private museum. Moreover, Bottura included works of art to embellish the refectories that he opened throughout the world: “It is not only important for people in difficulty to find a place where to eat, but it is also important that it is a beautiful place, so that the meal is not charity, but a moment of inclusion.”

Bottura, now an official artist, is rightly among those prodigious chefs who are the living proof that gastronomy can be an art, and it can be inspired by art as well as inspire it.

Previous Post “FuturPiaggio”, a new exposition in a renewed museum
Next Post A "horrific" paradise by Lake Como