Art and Italian fashion in Munich 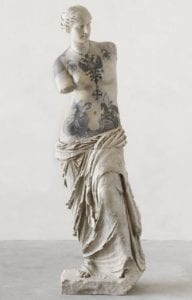 On July 2nd, the Consulate General of Italy and the Italian Cultural Institute organized and presented the glamorous evening “Le forme dell’eternità” (The forms of Eternity) in the evocative setting of the Glyptotheum of Munich, one of the most famous German museums of classical antiquities. During the evening, dedicated to Italian artistic excellences,  models presented haute couture dresses by Elena Berton and wonderful women’s shoes by Walter de Silva among priceless Greek and Roman marbles and works by sculptor Fabio Viale. 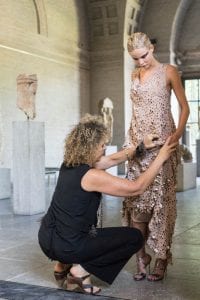 The Venetian Elena Berton proposed her new refined leather creations, which highlighted the excellence of the Italian traditional craftsmanship. The famous Walter de Silva, who signed designs for some of the most famous European car manufacturers, presented for the first time in Germany his new collection of women’s evening shoes that had been launched at the last Milan Fashion Week. The 250 guests, VIPs and representatives of the media also enjoyed ballets performed by the young Stimmenstrahl Trio, and excellent food and wine arrived in Munich for the occasion.

The aim of the event was to highlight its creativity, style, and traditions of the production of Italian excellences, and to raise awareness of its ethical and cultural significance in opposing the phenomenon of the outsourcing of work.
The successful event also served as a reminder of the inauguration, on July 12th, of the first exhibition in Germany of the extraordinary Carrara marble works of the famous sculptor from Pietrasanta, Fabio Viale. Viale’s beautiful works have been brought to Munich Glyptothek by the Consulate General of Italy with the help of the Italian Cultural Institute.

Previous Post Italian icy and tasty works of art
Next Post 'Sicario: Day of the Soldato' by Sollima